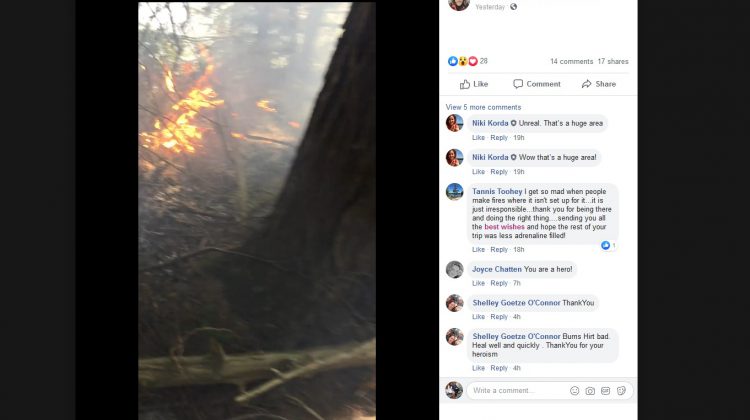 A screenshot of part of Stuart's post, showing flames from the wildfire (Photo Credit: James Wood)

Stuart has been getting accolades from many users of Algonquin Park for his quick actions last Wednesday afternoon, which helped to knock down a budding wildfire on Ragged Lake.

Stuart had been taking a friend for some backcountry canoeing when he came across the fire on an inlet of the lake, which is located along the park’s southwestern border, near the Highway 60 corridor.

“We had just gone through the portage at the dam into Ragged and were what appeared to be the only people around at that time (approx. 3pm),” wrote Stuart, in a post to a Facebook page popular with Algonquin Park users.

“As I was busy looking for various wildlife to show her, I noticed smoke coming from one of the inlet bays which I found strange at that time of day. I thought maybe someone was burning wet wood but quickly realized it was dry and sunny. My curiosity became concern when I realized there were no campsites in that inlet. I quickly paddled over to discover a ground fire. I don’t normally record anything, but this time I thought I would so I could show Park Services when I got back.”

Stuart recorded most of the incident in a trio of videos, showing his efforts to contain the flames he found and soak down the area to stop the fire from spreading. He believed it was roughly 1200 to 1500 square feet in size when he came across it, with the wind spreading it quickly.

“I cut the first video when I realized I needed both hands now and was going to have to start physically cutting trees and felling them into the lake since the fires were raging inside the large trees,” wrote Stuart.

“I went from concerned to feeling helpless having nobody in site and no cell service, so I used the only two things I had, a four litre and two litre pot to run water up and down. When I realized I couldn’t stop it, I started soaking the perimeter to prevent further spreading and focused on the flare ups and hot spots.”

Stuart wrote that he saw a party of three canoes in the distance after around 45 minutes, and was spotted by the group’s guide.

“Unfortunately, I’ve forgotten the guides name, but if he reads this, I hope he responds so I can thank him for helping,” wrote Stuart.

“If the trees had flared and spread, it would have gone straight into Parkside as well and could have been catastrophic.”

After the guide’s party came to help, the guide went to a spot on the lake to get a cell signal. Park Services was reached, with a fire crew responding in around half an hour.

“I ended up with 17 burns and blisters on my feet, along with burns on my hands and melted and destroyed my new shoes, but in hindsight, it’s a very small price to pay to stop what could have been devastating to the forest, wildlife and campers,” wrote Stuart.

“People need to understand that root fires happen easily, and can take hours to surface, even when you pour water over it. Know your fire is out and if you absolutely have to make one outside of a designated area for whatever reason, disassemble it, dig down and pour water in the ground. We’re all stewards of the park when we’re there, and we all have to act sensibly and responsibly.”

Stuart told the MyMuskokaNow.com newsroom that he’s been going to the park for around 30 years, and the attention from his posts to the page has been nearly overwhelming.

“If that was you, or any other bypasser, I always say we’re all stewards of the park. When we’re there, we all share the park the same way, we all get the same benefits, and honestly, I can guarantee you everybody would have done the same thing. I didn’t do anything exceptional outside of doing my part to prevent something that could have been catastrophic.”

As for what he would tell others in the same situation, he recommended that they do their best to soak around the perimeter of flames they encounter, know where to get cell service, have a whistle to attract attention, and do as much as possible while maintaining safety.

“If you find something, I feel like it’s your obligation, you have to stay there,” said Stuart.

“Do whatever you’re capable of doing physically to try and contain it, look for somebody else and try and get other people to help you, but don’t leave it and try and go for help. You’d likely be better trying to safely contain it in one area.”

He urged people to stay safe, and avoid trying to be a hero.

In his post, he noted that he continued on his trip after leaving the scene of the fire and receiving medical attention from firefighters.

“I still had a good time teaching someone new and enjoyed my remaining trip immensely,” wrote Stuart.

“So if you heard the planes and helicopters on Wednesday, August 14th, that was why.”