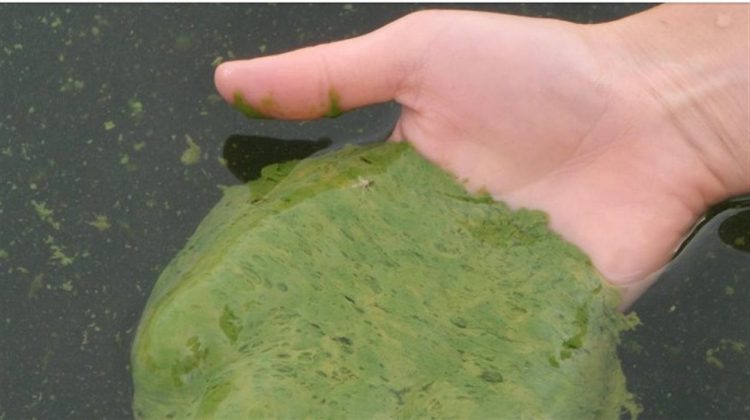 While blue-green algae is difficult to discern from other algae blooms, Renfrew County District Health Unit Manager of Healthy Environments David Tantalo says there are signs you can look for.

In many cases, the bloom will look like a soupy green sludge that looks similar to other algae or floating pollen. Algae are in the water all the time, and when you see it, Tantalo says to avoid it. However there are other ways to tell if the plant mass in the water will be hazardous to your health.

One way to tell the difference is the smell. Often blue-green algae comes with a rotting plant smell that other algae don’t have. It may not always have this smell, but Tantalo says that it could be an indicator that your bloom is toxic.

Another way of telling is the effect on the local water life. Blue-green algae is so toxic that a bloom may have dead fish around it. Tantalo says this is a good sign that the bloom is dangerous, and urges people to call the health unit or the Ministry of the Environment and Parks.

Ultimately, blue-green algae is difficult to detect without testing. So Tantalo urges people to not come into contact when you see it, and to not handle the water around it. Handling or drinking untreated water puts both humans and animals at a greater risk of coming into contact with it, so Tantalo says to only consume treated water. If your pet does consume lakewater, monitor their behaviour and take them directly to a vet if their behaviour changes after consumption.

Unfortunately, blooms of blue-green algae are now the norm instead of an exception. Although Renfrew County does benefit from cooler temperatures that do not cause blooms, the Health Unit now reports two to four sightings a year in the District’s waterways. With waters warming with the changing climate and extra nutrients flowing into the water, sightings of blue-green algae will only increase.

If you suspect you’ve found a patch of blue-green algae, either contact the Health Unit or the Ministry of Environment at 1-866-663-8477.