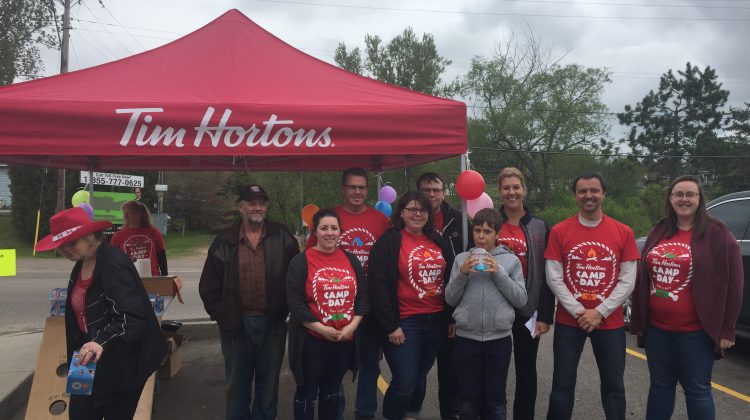 Camp Day brought a lot of traffic to the Tim Hortons in Barry’s Bay.

It is the third Camp Day for Owner Jason Armstrong. He says that all the coffee sales during the day go to the camp. He also has fundraisers running alongside the event, with money raised by those events going to the camps as well. With such a big day, Armstrong says all the staff come out to make the day possible, with some even volunteering.  The staff also organize the majority of the events, like raffles and games for kids. The staff also ran a bake and garage sale on the weekend. Local OPP ran the Barbecue.

Looking forward, Armstrong and staff are also organizing a softball tournament to support the camps that will take place in a few weeks in Barry’s Bay. A number of teams have already sign up and small prizes are available for the winning team.

Funds raised go towards Tim Horton run camps for underprivileged kids. Armstrong says once they are in they go for 5 year. He says the camp teaches life skills to kids, and is completely free for parents. He says the kids from Barry’s Bay are sent to the camp in Parry Sound. Armstrong said based on the traffic he’s seen he believes he can beat last year’s record. Across the board last year, $13 million was raised for camps through Camp Day.

All in all Armstrong and his staff enjoys the day. He says that days like this are often a lot of fun.