Killaloe Couple Wins SUV with Roll Up the Rim

That’s coming from Ashley Bielaskie after her husband Jason showed her the inside of a Tim Hortons coffee cup that said they had won a Jeep Compass with the franchise’s Roll Up the Rim to Win contest.

Her husband Jason Bielaskie says that his wife had bought him the coffee from the Tim Hortons in Barry’s Bay earlier that day and had brought it to him at work. He drank it early in the afternoon and later in the day, before leaving to go home he was with a few coworkers when he started to unroll the rim. He says he saw the word “compass” at first and was confused and as he started unrolling it more, he saw “Jeep Compass” and that’s when he put two and two together and realized he had won. He says he then went home and gave the cup to his wife and said “here, I got you a present”.

The Killaloe couple, who have 3 kids, are ecstatic. Joyful and down-to-earth, they jokingly say they deserved it. “I’ve drank enough Tim Hortons to pay for this Jeep” Mr. Bielaskie says before laughing. He adds that this is the first big prize they’ve won.

Mrs. Bielaskie says she had to look at the cup ten times to believe they won, “I was jumping up and down”.

Owner of the restaurant, Jason Armstrong says that they’ve been very lucky this year. Only forty vehicles are won in all of Canada, and one of them was in Barry’s Bay. He also adds that three mountain bikes, worth around $600, have also been won in Barry’s Bay (by local customers) this year which is incredible given that Roll Up the Rim to Win only lasts 6 weeks.

The couple, along with their three kids, took part in an official photo op and presentation this afternoon where they got to pose with their prize (they are actually getting a black Jeep Compass). 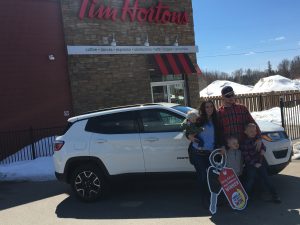