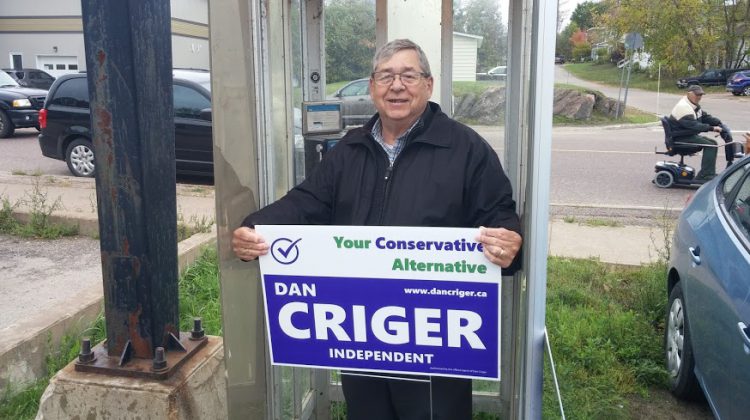 An independent candidate is positioning himself as an alternative conservative choice for Renfrew-Nipissing-Pembroke.

Dan Criger says he stands for encouraging small business and entrepreneurs to bring jobs to county, providing lower taxes, good paying jobs, and a better economy. He says people in the riding want their environment looked after and want someone to represent them in Ottawa.

The store owner decided that he had enough and that someone had to do something for the county. He says he has talked to thousands of people and listened to their concerns. Criger took specific aim at the carbon tax, saying it puts undo strain on regular people. He said that while lower income people foot the bill, the rich can afford to absorb their losses from the tax. On cost of living, he says the tax puts a regular person at risk through the supply chain, as the cost is off-loaded on the consumer. He says he has heard people say they have to make a conscious decision between heating and eating, and the carbon tax has made that worse. On flooding and climate change, Criger says that he wants ongoing commissions to play out before speculating on solutions.

For those that are undecided, Criger is placing himself as an alternative to the conservatives. He says people he has talked to don’t want the conservatives in power and they don’t want Cheryl Gallant to be their representative. Criger says he wants to represent the riding and do what the people of the area want without being beholden to any party. By not being in a party, he says he will not be stuck on the backbench. He hopes to get things done by meeting with the ministers in charge, where he says the decisions get made. He also hopes to create a trend where politicians start respecting those on the other side of the table.

You can find Criger’s platform here.

The My Barry’s Bay Now Newsroom is reaching out to all Candidates running for the riding of Renfrew-Nipissing-Pembroke. A full list of candidates can be found here.