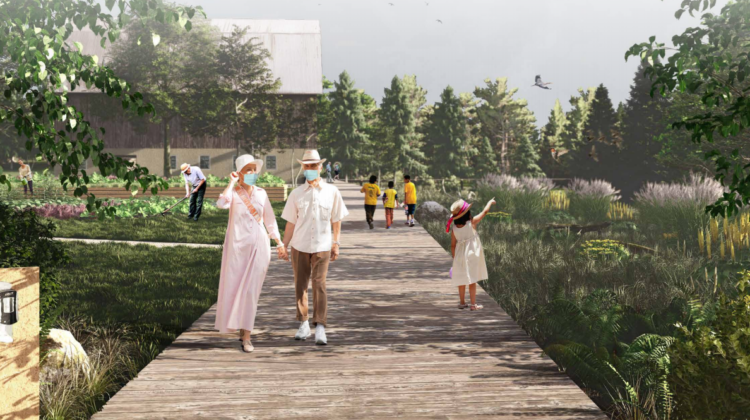 It’s an award-winning vision of Hoch Farm that aims to mesh nature and art together into one public space.

Ben Barcocsi, a student at Fanshawe College’s Advanced Landscape Design program has won the TD Environmental Design competition for a concept of Hoch Farm in Killaloe. The location, just off Highway 60, is home to the Hoch Barn, formerly known for being the location of the farmer’s market, and a wetland area. It is the only designated heritage site in Killaloe-Hagarty-Richards Township, according to their website. The township announced the demolition of the Hoch Farm Museum in July of 2020, citing prolonged deterioration.

Barcosci’s teacher, Eli Paddle, is a Professor of Environmental Design and Planning at Fanshawe College. Paddle grew up in Killaloe and knew many of the people behind the decision to develop it into a heritage site. He says the project through the school was a labour of love for him, and one that let him reconnect to the land in which he grew up.

Barcocsi took inspiration from the Harborfront Centre in Toronto to redevelop the area. The plan includes an expansion of Barney’s Boardwalk across the wetland that will include informative trail signage. The barn itself would serve as a studio space for artists and artisans that would feature studio class spaces. The proposal takes its inspiration from the “Back to the Land” movement, where artists moved to rural communities like Killaloe in the 1980s. The site redesign aims to be done with limited impact on the environment, with the Farm making use of the Candian Shield geography and native plants and trees that will also attract native pollinators and complement the wetlands. Space would be set up for the farmer’s market, which would double as a stage area for musicians. However, a large component of this year’s TD contest was to recreate the area with COVID-19 in mind. Barcocsi does this by designing the land in a way that allows locals to generate revenue and combat food scarcity with garden centers in the footprint of the old museum. In the wintertime, a skater’s loop would become the main attraction.

Professor Paddle says that ecology was a big part of what the project was about, and the plan proposed by Barcocsi hits the nail on the head. He says the concept respects not only the farm’s history but that of the pre-colonial history as well. On the concept presentation itself, Paddle says they aim to make their proposals up to industry standards. While the proposal itself is not in front of Killaloe-Haggarty-Richards Township as a design for consideration, Paddle is aware that several proposals similar to this concept are before council. He says he would be happy to lend the work Barcocsi has done to those who want to redevelop Hoch Farm, as projects with such a visual asset to their proposal tend to be more likely to get funding.

Barcocsi snagged first prize in the competition, which came with a cash prize of $2,500. To see the full proposal, click here.