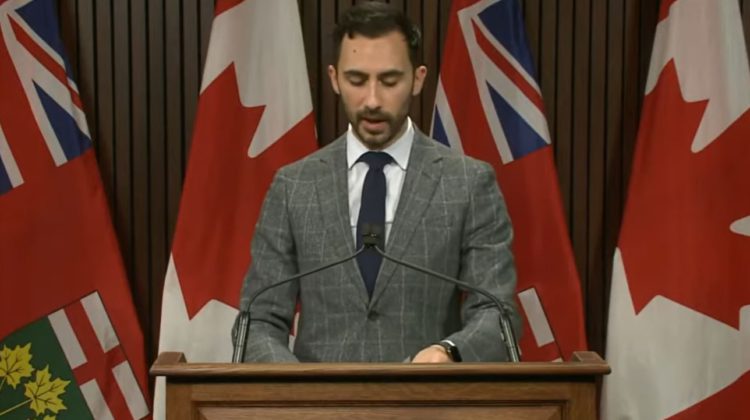 “I believe the choice we’ve provided parents has been critical,” Education Minister Stephen Lecce tells the MyMuskokaNow.com newsroom when asked about online learning.

He says when talking to parents about online learning vs. in-class learning, the “overwhelming” response has been that they appreciate having the choice. Data from the province says that around 280,000 students opted to learn in-class. “There are a lot of kids that opted in (for online learning) because of personal circumstances,” he notes, adding “whatever the rational” is, one of the strengths in the province is that parents have that choice.

Lecce says he knows there’s room to improve. He notes that this is the first time online learning has been implemented to this extent in Ontario. “We have literally stepped up our game and built an infrastructure and an expectation that is strong,” Lecce says. Since the current system was put into motion in spring 2020, he says it has been “dramatically” improved. “I would argue it’s lightyear’s ahead,” he says of where the system was last year, claiming that Ontario has the strongest “minimum standards” in Canada. Lecce explains that 75-percent of online classes must be done live with over 200,000 laptops provided and internet connections set-up for nearly 10,000 families. He adds that mandatory professional development is also in place for teachers.

“What I’m hearing overwhelmingly is that parents want to preserve the choice,” he says.

Lecce adds that “in the coming weeks” more information will be released on what schools will look like in September. He says the province wants to make sure parents have a clear picture before making a decision on whether to send their children back to school, or have them learn from home.

A report from the DailyHive says that 840 public schools out of the 4,828 in Ontario have had at least one COVID-19 case. Lecce says the system put in place by the province has been “overwhelmingly” safe with low levels of transmission within schools. He says we need to look on the positive side, noting that most of the schools in the province are open. “I think that’s a strength,” Lecce says. “I think we have to lean into and really highlight some of the positives taking place.”

“The fact of the matter is (Ontario’s) Chief Medical Officer of Health (Dr. David Williams) believes schools have been safe in the fall,” he says. “They remain safe today.”

Lecce says to keep schools safe, the province has put in place stricter measures. He says that a one-symptom screener is in place, so that any staff member or student is found to have any symptom of the virus, they must stay home. He says they’re now providing “higher quality” masks on top of a stricter masking policy. More teachers have been brought in as well to keep class sizes low and additional custodians have been hired to help keep up with cleaning protocols.

“For our government, keeping schools open is paramount,” he says, pointing out the role in-class learning has on youth development and their mental health.

As we get closer to September, Lecce says more support will be given to schools but didn’t hint at what that support could be. “Collectively, we’re doing something great in Ontario,” he says. “We just have to continue to follow public health advice.”