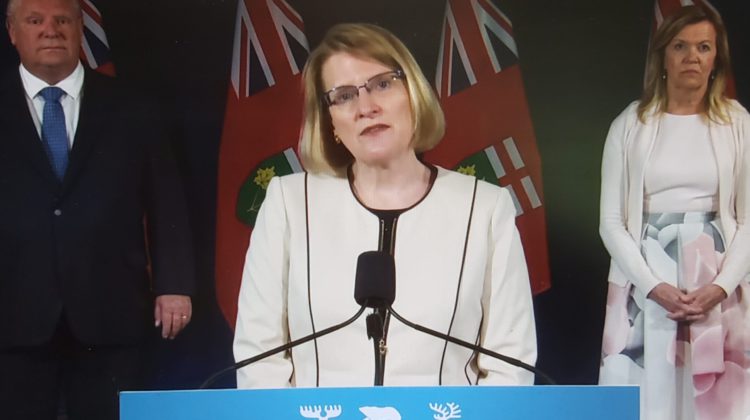 Ontario Premier Doug Ford says the province is “preparing for the next step, the next stage of the re-opening.”

During his daily press briefing, Ford said all of Ontario is now in Stage 2 of reopening, and legislation being tabled Tuesday will enable the province to lift the state of emergency it has been under later this month.

He says the legislation would allow cabinet to extend existing orders including limiting access to long-term care homes.

However, he says it wouldn’t “allow the province to create new emergency orders,” but make it so “they can only be amended or removed.”

The PC government will table a motion on Wednesday to extend the state of emergency to July 24th from July 15th so that the new legislation can pass.

On claims that the new legislation is an overreach of power, Ford says “I’m dead against big government. I’m dead against Big Brother and nanny state telling you what to do.”

On reports of long term care homes that don’t have air conditioning for seniors, Ford says he’d like to stick the owners in those rooms for 24 hours and see how they’d like it.

He says he will follow up personally with homes that don’t have a/c. and he’d consider making air conditioning mandatory.

Ontario Minister of Health Christine Elliott told the press conference that social gathering limits will be increased as part of Stage 3 but she didn’t provide a date for when that will happen.

She says the province has a strategy to get 50 thousand tests done a day into the flu season in October.