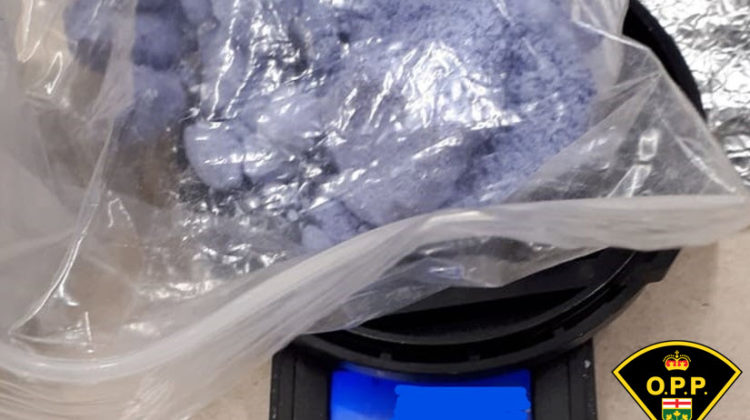 Purple Fentanyl (Photo Credit: Upper Ottawa Valley OPP)
The emergence of purple fentanyl has lead to warnings from the Renfrew County District Health Unit.
They say that it has been found locally and is suspected of leading to an increase in overdoses in the area. The RCDHU is warning the community that street drugs may be cut or mixed with fentanyl or carfentenanil. They say a very small amount of these substances can cause an overdose.
The Unit urges drug users to never mix drugs, never use alone, go slow and know your tolerance. They also suggest carrying a Naloxone or Narcan kit that can reverse an opioid overdose. The Unit also urges the general public to recognize the signs of an overdose: Slow or irregular breathing, blue lips and or fingernails, limp body, deep snoring, tiny, pinpoint pupils and a loss of consciousness. The Unit says that if someone is unresponsive and showing these symptoms, they may be overdosing. They say to immediately call 911.
Upper Ottawa Valley OPP have seized quantities of purple fentanyl in the area in the last week. A 39 year old from Pembroke has been charged with trafficking offences when police found quantities of fentanyl and MDMA.