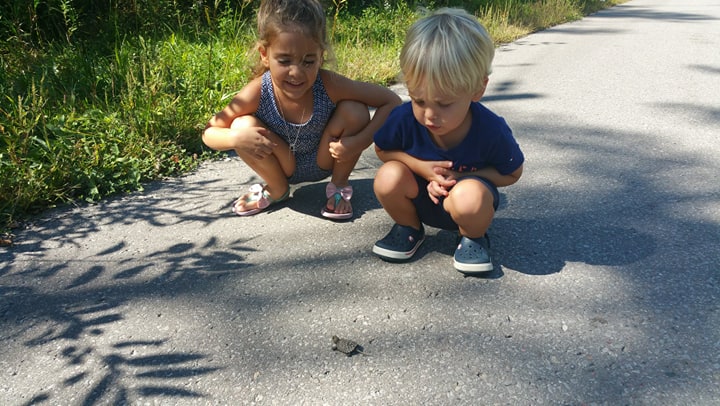 Kids helping a turtle hatchling across the road (Photo supplied by: Kelly Wallace)

She says nesting season normally starts mid-May and goes until mid-July, but the start was pushed back because of spring’s late start. June would normally be the peak of nesting season, but that’s now expected to happen next month.

Wallace says to expect to see turtles out on the shoulders of the road and see them crossing the road. She says you may also spot them in your backyard. If that’s the case, Wallace suggests getting a nest protector to ensure its survival or making your own. You can call Wallace at 647-606-9537 for more information on how to buy or make a nest protector, or reach out to her by Facebook. “If a nest can be corrected, it significantly increases the turtles’ chances of survival,” Wallace says. She explains that eggs have less than a one percent chance of survival if the nest is left on its own and not protected.

“I wish I could send a memo to all turtles to nest on people’s property because that’s their best chance of survival,” Wallace says.

While the pandemic has been good to turtles since there are fewer cars on the road, it also opens them up to being attacked by predators. Wallace explains that just like how turtles are attracted to the side of the road now due to less noise, so are predators. “That’s why I wish more turtles nested on private property,” Wallace says. She adds that the chances of survival for a nest drastically go up when it’s on private property.

Wallace says if you have any questions about turtle nesting season – like if you want to buy or learn how to make a nest protector – to reach out to her.