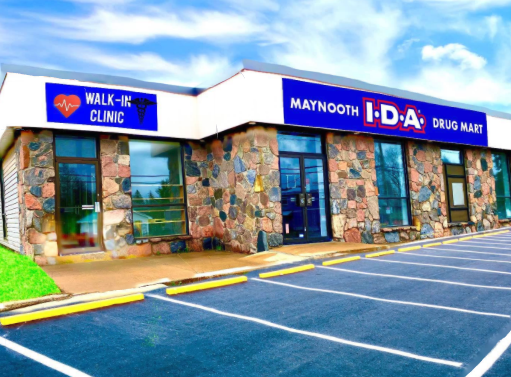 A concept of the future Maynooth IDA (Photo credit: Bancroft IDA on Facebook)

The Owner of the Bancroft IDA Mena Yohanna has given provided details on the future Maynooth IDA to the MyBarrysBayNow.com newsroom.

The lot that was formally home to the Scotiabank in Maynooth has been vacant since the branch closed in January 2017. That will soon change with Yohanna explaining construction on the full-service IDA will start next week. He expects work to be done by the end of August.

“It’s exactly the same, just in a smaller shop,” he says. Yohanna adds the Maynooth IDA will carry the “more essential items” like over-the-counter vitamins and healthcare items, but both stores will work together to ensure supply meets the demand. He says while the pharmacy will be smaller, it will be full-service. Free delivery will also be offered at the new IDA.

When construction begins next week, Yohanna says there is “quite a bit” of work to do. He explains they have to tear down walls and set-up proper infrastructure for the future pharmacy. “We are wanting to make it like an open concept,” he adds.

Yohanna says having a second IDA will help them divide the load. During the pandemic, he says the load has been heavy on the Bancroft IDA so they want to make sure they can handle an increase in customers in the future.

Yohanna says any updates on the future Maynooth IDA will be posted to their Facebook page.