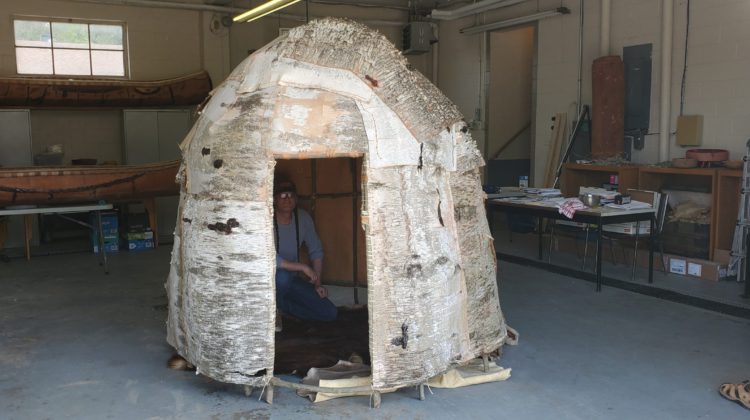 Kijicho Manito Madaouskarini Chief Stephen Hunter says he and a few others spent a week making a traditional Algonquin dwelling – a Pikogan – for the Canadian Museum of History in Ottawa.

“I have a friend from Pikwàkanagàn who works with Indigenous Experiences who operate on the property of the Museum of History,” Hunter says. He adds they were looking for a traditional dwelling to put on the property for people to see and learn from.

Hunter explains the Pikogan was built over the course of a week with help from his friend Chuck Commanda and some volunteers from the community who helped gather the materials needed to build it. Burch bark, spruce root, and leatherwood – which was used to keep everything together – was collected for the build. “We tried to make it as close to what we thought it would have been,” Hunter says.

While it took around a week for the group to make it, Hunter says it could be made in a day or less depending on how urgent the need was. “Back when we were using these the resources would have been right there it would have been made quicker,” he says. If you were planning on spending the winter in it, you would spend more time on it to make sure it can withstand the weather for the next few months.

The Pikogan will be shipped off to the Museum in Gatineau to be displayed there along with a short video made by Hunter explaining what it is, how it was used and why it’s important to the history of the Algonquin people. “We’re always looking for ways to share Algonquin tradition with the border community,” he says.