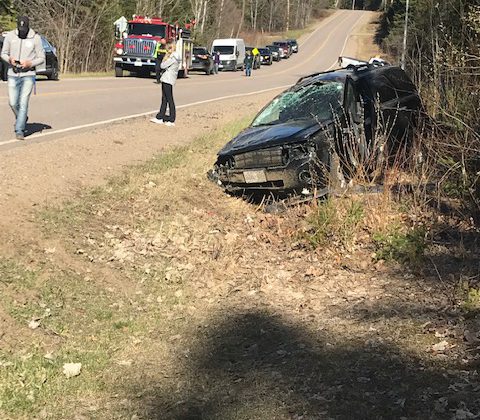 They are calling a driver who crashed on Siberia Road extremely lucky.

The Madawaska Valley Fire Department received a call on Tuesday around 4:30. They say a vehicle was travelling east bound and entered the ditch and struck a culvert. The vehicle then went airborne for 48 feet before striking a guide wire. The Department says the vehicle went a total of 100 feet before it had stopped. Paramedics arrived shortly and removed the person from the vehicle. The driver, a 66 year old male from Kanata, was transported to St. Francis with undetermined injuries. The department says that he wore his seat belt and air bags deployed, which they say saved him from more serious injuries.

The department said that 2 trucks from the north hall, 11 fire fighters, 1 OPP officer and 2 paramedics and 1 paramedic supervisor were on the scene. The MVFD also praised bystanders for keeping their distance and for helping first responders.