Ontario unveils plan to reopen; Ford says it is a “road map not a calendar” 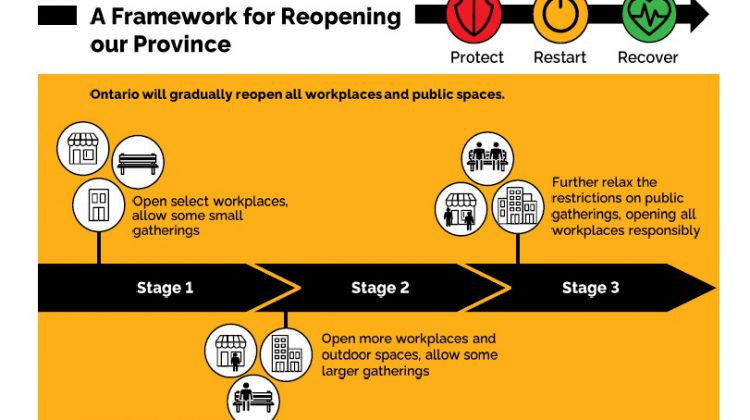 The province has unveiled its three-phase plan to open up the economy.

The first phase will see some select workplaces reopen and allow some small gatherings to take place.

The second phase will see more workplaces open along with more public spaces and allow for some larger gatherings.

The final phase will see further relaxation of gatherings and allow workplaces to open safely.

Ford says concerts and sporting events are not in the near future, “I don’t believe when sports come back anywhere in North America there will be full stadiums, they will be empty at least in the beginning.”

These stages will be closely monitored by public health officers for between two to four weeks before moving on to the next stage.

However, Premier Doug Ford did not give any hard dates when this process will begin, “Hard dates won’t be set until we are ready.  They must be responsible and must be measured.”

“At the same time, we are preparing for the responsible restart of our economy. This next phase of our response to COVID-19 is designed to help us map out what needs to be done, and when, to get us back on the road to recovery.” Ford said.  Ford said the last thing he wants to see a spike in more cases, “let’s get it right the first time.”

There will be a set of four criteria the Medical Officer of Health will use to determine how the province will reopen.  Those include virus spread and containment and a consistent decrease of new COVID-19 cases for two to four weeks, a decrease in hospital cases, and a slowdown in cases that cannot be traced to a source.

Each stage will mean continued protection for the province’s most vulnerable as well as public health measures like handwashing, physical distancing, and mitigation plans to reduce health risks.