Water Levels Normal For This Time of Year Across Renfrew County 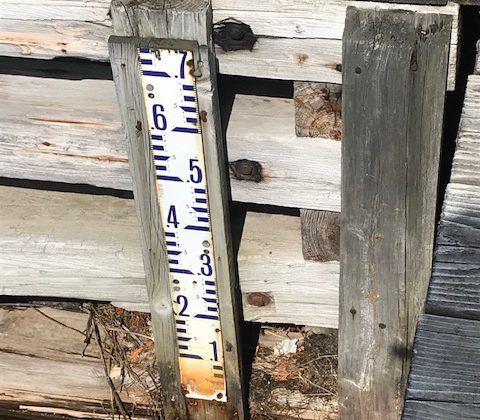 Barry's Bay Water Measurement at the boat launch (Photo Credit: Corwin Quade)
Madawaska Valley Township says that the spring frishet is progressing normally this year.
Corwin Quade of the Madawaska Valley Fire Department says that water levels at both the Combermere and Barry’s Bay boat launches are exactly where they should be for this time of year.
The Renfrew County Emergency Management Community met on April 15th to discuss conditions on the various rivers in the region. Jordan Hughes with Ontario Power Generation says that there has been a reduction of inflows around the river and tributaries are tapering down. He also says that there has been very little reaction from the rain this past weekend, and that there is very little snow left in the watershed. Shawn Cameron of Renfrew Power Generation says that water levels in the Bonnechere River going into Round Lake continues to drop, with the crest predicted to have happen sometime this week. Golden lake is 10 cm over its average peak for spring, and is expected to crest in the next couple of days. Water levels in Lake Clear are above average but flooding is not expected in the area. The Ottawa River Regulation Secretariat says that water levels, snow melt and tributaries are all declining. They also say water levels in Pembroke are expected to return to where they were about a week ago.
The water safety statement on watershed conditions has been extended until April 22nd as a precaution to boaters, swimmers and anglers.