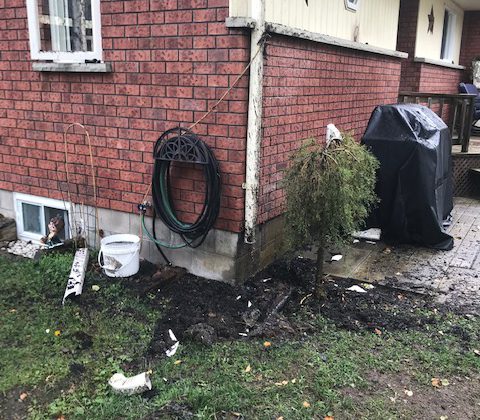 A bolt of lightning was severe enough to call up the Madawaska Valley Fire Department.

The MVFD were called out on Saturday September 7th around 4:20 PM to a house on Old Barry’s Bay Road. Reports had stated that the house and a nearby gazebo were smoking due to a lightning strike. The Fire Department responded with three trucks and ten firefighters, as well as OPP and Hydro One.

MVFD say that the smoking had stopped when they arrived, but there was visible damage to the house. The department says that eyewitnesses saw a “blue ball of fire” travel across the back yard, under the gazebo, and exited out of nearby tree roots. The department says another person saw a blue ball of fire travel across the front yard and up a hydro pole. Eye witnesses say that the ball hit the transformer and resistor on the pole, causing the resistor to melt. The event caused a power outage in the area and kicked out the breaker in the house. MVFD says the strike damaged telephone lines and the siding of the house, as well as disturb the furniture in the gazebo. The department says one person experienced numbness from the noise of the blast, but no one else was injured. Residents close by said houses shook from the strike.

The department says it was on location for two and a half hours before giving the all clear. An electrician was called to check the wiring of the house and Hydro One quickly restored power to the area.