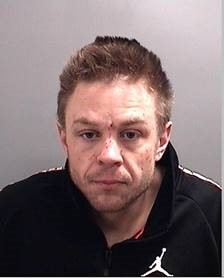 Darren Pearce Is wanted in Connection and is considered dangerous (Photo: Provided by OPP)

Renfrew OPP is searching for a suspect in relation to an assault.

An arrest warrant has been issued for Darren Pearce, 34, with no fixed address. He is wanted in relation to the investigation into an incident on June 16th. Police have considered him dangerous and have advised the public not to approach him if they see him. Anyone who knows his whereabouts or anyone who may come into contact with him is urged to call 9-1-1 immediately.

The assault happened on Argyle Street South in the Town of Renfrew. OPP and Renfrew County Paramedics located a 37 year old with serious injuries. The victim was taken to hospital and later airlifted to Ottawa. A man has since been arrested in relation to the incident and has been charged with attempted murder. He remains in custody pending a bail hearing.