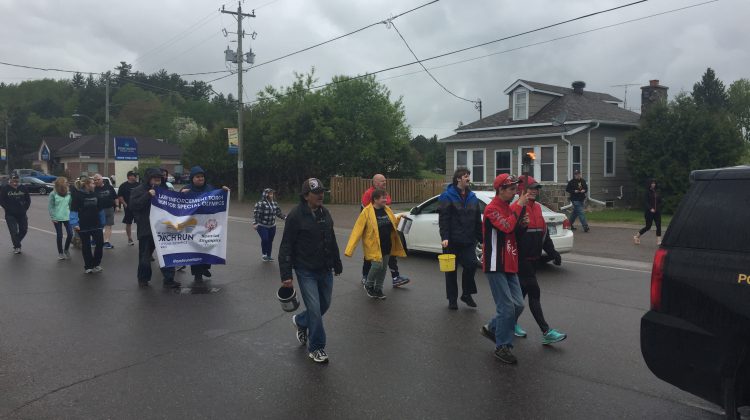 Despite the rain, the Law Enforcement Torch Run went down on Tuesday.

Athletes and supporters started their march from Northern Credit Union and ended at Community Living. The run was accompanied by cruisers as they made their way down Opeongo at 2:30. The run had previously been in Pembroke and Petawawa.

Bill Dixon, zone coordinator for the torch run said it was important for law enforcement to be out there with the runners. He said he wanted to make sure his team was with the athletes.

Dixon said that while only 3 or 4 officers come with the run from town to town, but local athletes and law enforcement come out to run with them. Total people running was around 20.

In Barry’s Bay last year, Dixon says he raised over a hundred dollars. Even with the rain, he expects to raise similar amounts this year. He says every five cents they make that they didn’t have before is five cents they now have to spend.

The run raises funds for 2600 athletes in the province. Dixon says the run is the biggest source of revenue for Special Olympics.

And despite the rain, the torch managed to stay lit.