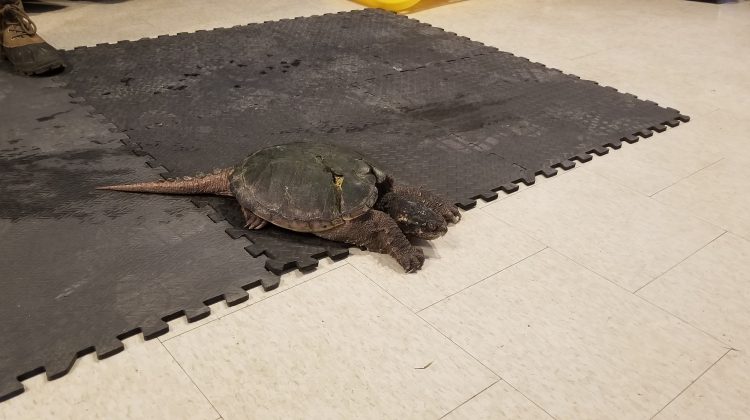 One of the many turtles that were brought to the Turtle Fesitval on Saturday (Photo credit: Mathew Reisler - Moose FM)

$520.15 was raised during the 2nd annual festival celebrating our shelled friends.

That money goes to support the Turtle Guardians tunnel and trauma campaigns. The funds will be split 50/50 between the two campaigns. The tunnel campaign works to build turtle tunnel sites throughout Central Ontario. The trauma program is run by the Ontario Turtle Conservation Centre, which is Ontario’s only turtle hospital.

Event organizer Kelly Wallace adds that attendees also dropped off supplies for Turtle Guardians, which included $145 worth of gift cards.

“There were a lot of familiar faces and a lot of new faces as well,” she says. “I think the adults enjoyed it as much as the kids.”

Wallace says she will be continuing with her turtle talks throughout the summer. The next one is coming up on the 22nd in Faraday. She will also be at the Riverstone Residence on Bancroft next week to paint turtle signs with seniors.

You can stay in touch with the Think Turtle Conservation Initiative with their Facebook page.