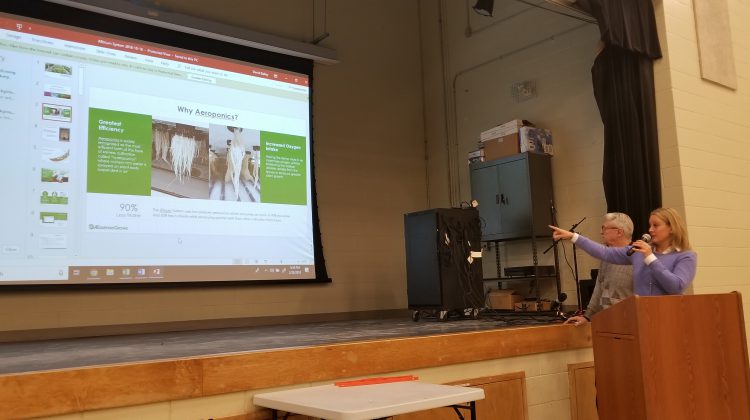 “I’m ecstatic,” Mayor of Hastings Highlands Vic Bodnar said after Thursday’s meeting. “This means exciting things for the community.”
Zena Prokosh, one of Aero Pon’s board members, says that a conservative estimate on how many jobs will be created is 200. She says that’s in comparison to other LPs of similar size. She notes that as the facility continues to expand so will the jobs it creates. “First and foremost is to work with the community,” Sharpe said during Thursday’s meeting. “We are definitely planning on working with everyone in the community as much as we can,” Prokosh added.
Aero Pon Leaf Canada’s CEO William Sharpe says construction workers are already inside the facility working on it. He says that over the next few weeks materials will be ordered to build the walls and the infrastructure in the former G.P. Flakeboard plant. Sharpe added that the equipment will need to be extensively tested beforehand. “Once we’re comfortable with that we’ll continue to expand the building,” he said. Mayor of Hastings Highlands Vic Bodnar says the municipality’s building department will be watching over Aero Pon as construction continues to ensure everything is done correctly. An inspector will be on-site to make sure everything is done to code. He added that issues like transportation will be looked at further down the line.
Sharpe says they expect to get their license in October or November after applying for it in June 2018. Zena Prokosh, who will be a part of Aero Pon’s board, adds that it takes such a long time due to the backlog of 2,000 people applying for various licenses. Before that, they will need to take a video inside the building detailing the work that has been done, send that to Health Canada who will then send an inspector down to make sure they’re following the set guidelines. If all goes well a permit will be issued for their initial growing period. A sample of what is grown then will be sent to an independent lab for testing and then they will be issued their license. Prokosh notes that the license they applied for is a standard cultivation license and a standard processing license.
“It’s fairly new, but it’s been tested in NASA and it’s shown great success,” Prokosh says about the Aeroponics system that will be used at the facility. She says that even with that, Aero Pon will still thoroughly test it to make sure it meets their specifications and expectations. “I think you’re going to see an explosion of aeroponics in the future,” she says. She notes that it uses 90-percent less water than the traditional cultivation method uses. It was also noted that 60-percent of the business will be in cannabis oils, rather than growing plants. Those oils will be used for pharmaceutical purposes like creams. “All in all the expectation is that we’re going to have a greater product,” she says about using the aeroponics system.
Prokosh notes that the location of the facility is great. While major security precautions do need to be taken, the setting allows them to be in the community, but also far enough away that allows them to have “that safe space.” Of the other six members of Aero Pon’s initial team, there are three with experience in security. Paul Thorne worked as the head of security at the Lester B. Pearson International Airport in Toronto, while Donm Stewart worked as security for RBC and Andrew Ellis is a former Deputy Director with the Canadian Security Intelligence Service.
One of the other ventures Aero Pon hopes to get into over time is a brewery. Sharpe says they have talked with Logan Krupa with the Bancroft Brewing Co. with Sharpe calling Krupa a “polished young man.” He added that they do want to work together in what he says would not necessarily be a partnership, but something where they will help the Brewery with distribution. Prokosh notes that amendments will need to be made to their licenses allow for a brewery, the cottages they would like to put up behind the facility along York River and a research and development building. “It’s something that’s in our foresight,” Prokosh says, but adds it will be done further down the line once more revenue is coming in.
When speaking after the meeting, Bodnar clarified that the municipality is “more of a relationship” than a partnership with Aero Pon. “We’re supporting them however we can politically,” he said. He gave the example that if Aero Pon runs into a problem with a ministry, Hastings Highlands would back them up and say they have the support of the community. No money will be put into the project by Hastings Highlands, Bodnar said.

A website will be set-up thanks to work that will be done by a local company, Sharpe says. On there, updates will be posted regularly. If you have any questions or comments, you’re being asked to send them to aeroponleaf@gmail.com.