A tow truck erupts into flames on Paugh Lake Road.

Fire Chief of Madawaska Valley Township Fire Department, Corwin Quade, says they responded to a call about a fire yesterday evening at approximately 6:40.

He says a motorist driving on Paugh Lake Road noticed the fire and called 911. The fire department was dispatched and arrived on scene within 6 minutes. Quade says fire fighters could see an orange glow in the sky while they were arriving on the scene.

He says the tow truck, belonging to Combermere Service Centre was engulfed in flames and it took them 20 minutes to extinguish the fire.

Quade states that no one was home at the time of the fire and adds that the 2019 Freightliner truck is a total loss. Fortunately no one was hurt and the fire is deemed not suspicious. 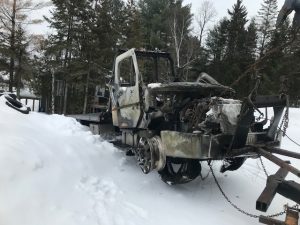